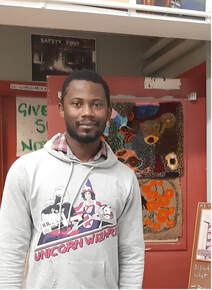 Ibrahim Alimamy is a leader of RAPAR creative group. He is a community activist and politician with a BSc in Economics, originally from Sierra Leone. He suffered from polio and this affected his daily life and encouraged him to become an advocate for the disabled. He led a Young Generation of People with Disability from 2007-2012 back in his home country and also advocated for the LGBT community. Alimamy moved to the UK in 2018 and became a valuable member of his community.  ​After attending a 3-months co-training with Sheba Arts, he was appointed as the creative leader of  RAPAR drama group. This is one of our associate groups we brought under our umbrella to support during Covid-19. ​
RAPAR Drama is a group of people from many different countries, who speak many different languages, who are many different ages. Together, we make theatre.
The initial project in January 2019 - 'Incredible Week For The Banks' - was co-created by a company of 10 over the course of 6 months. The first play was a comedic exploration of culture clash:
"A story of two families, one African, one English, who become neighbours at the beginning of the week. An exploration of culture clash, misunderstanding, awkwardness and prejudice that is challenged by the relationship between the children.  A Romeo and Juliet story for modern times."
It was performed at HOME Theatre, as part of CAN's Horizon Festival, and The Met during Refugee Week 2019.

Following the success of that work and the company's desire to keep creating we applied for an Awards For All Grant which we received in September 2019. This money is being used to learn new skills and create - over a nine-week block - pieces of theatre which incorporate the newly learnt skill. The reduction in time frame was to better accommodate the intrinsic instability of peoples lives in the asylum system. Also to better facilitate the participation of many people whose memory has been adversely affected by trauma.

So far the company have created:

Sad Reality - Mustafa Khogali ran two drumming workshops which allowed the company to explore the effect of using live sound in their work. Sad Reality was an emotive, powerful, snapshot of life inside the Hostile environment. From Dallas court to dodgy solicitors and the endless waiting - using live drumming to create the feeling of each struggle.

Invisible Borders in the UK - Sandra Chapmen (Reel Films) ran a filming and editing workshop and the company began to create an expose of the invisible borders inside the UK. The company took turns to film, to be the interviewer and the interviewee and to edit the final piece together. The finished documentary is a really rare important piece of work, delivered in English and French, entirely made and directed by those involved.
Stories of Freedom - Elmi Ali ran a storytelling workshop with the company. They have written and are working on performing stories of freedom - freedom in all its forms, from the liberation of countries to our own heartbeat.

Reclaim the Stage
This is a collaboration between Maddie Wakeling from Kahlo Theatre and community groups in Hulme and Bury. Through online workshops, discussions and writing, the groups have devised original audio plays inspired by there experiences of the pandemic.

Voices of Lockdown - Bury Community
Maria has always been a loud neighbour but now its lockdown and with tensions running high, Sally and Sharon can't take it anymore. Once locked up in their separate houses all three begin to reflect on the things they have lost. The play explores the idea that only by missing something can we know its value.

​In the Morning We Are Free - Hulme Community
The end of lockdown has been announced, tomorrow the country is free. Paul, Charlotte and John lie awake in their separate homes. Their minds are racing. They feel as though they are hurtling towards dawn and aren't sure if they are ready for the day.